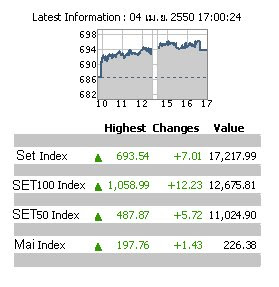 Result of FTA between Thai-Japan.
This is the first day though.

The increasement in the SET is due to the investment made from Japan.
On the surface, it's a good sign, but deep inside, the "wave" is slowly approaching.

From an investor's view, I wouldnt mind to have most of Thailand stocks rising. However, after a long analyze, I felt that "nominee" fever will come back, exactly same way as how it was with the Shin Corps.

The law that was made after the coup regarding "nominee" and "foreign investors" problem are said to be able to stop and prevent foreigners from holding major share in a Thailand company.
Basic needs are food, and if foreigner could have a "nominee" in one of the biggest Food Industries in Thailand......I dont wanna think what would happen. Of coure the same should have happen in some companies and we need no more of these.

Enough ranting for my sake, I've been hearing that some Japanese themselves are also against the FTA between the 2 countries. And the protestors seems to be doing things a little bit "rougher" than Thai.